Today, River Action has written to the new UK Prime Minister and Environment Secretary to congratulate them on their new appointments – but also to urge them to take immediate action to address the appalling state of the UK’s rivers. 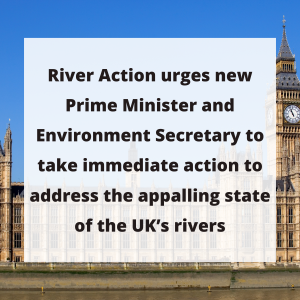 In this letter, we have clearly explained the key drivers of the river crisis:

We have also laid out clear steps for the new Government to follow in order to address the pollution crisis on our rivers: