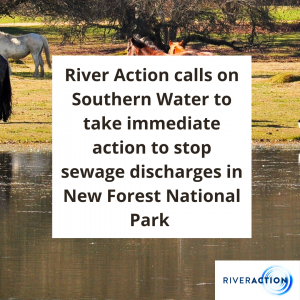 River Action has written to the CEO of Southern Water to demand an immediate end to the discharge of raw sewage into the rivers of the New Forest National Park.

Data published recently by the Environment Agency in response to a Freedom of Information Request by River Action shows that in 2021 raw sewage was discharged into the two principal river catchments of the New Forest, the Lymington and Beaulieu Rivers, on more than 250 occasions and a total period of just under 1,900 hours.

Reported discharges by Southern Water sewage treatment plants have now occurred, according to Environment Agency data, into these two rivers on no less than 900 occasions over the last three reported years.

According to the 2022 TripAdvisor Travellers’ Choice Awards for Destinations, the New Forest has been voted the number one National Park in Europe and the tenth best National Park in the world.

With over 50% of the National Park designated for its importance for nature, the New Forest is also an international ecological “jewel in the crown” for flora, fauna and fungi, hosting an estimated 2,700 species of fungi and 15,000 species of insect (two-thirds of the UK total). New Forest wetlands are a particularly important habitat for wildlife and biodiversity, and significant public funds have recently been invested in pioneering stream restoration work to improve the biodiversity and natural capital of rivers, streams, bogs, and valley mires.

The most frequent sewage discharges over this period in the National Park have occurred at Brockenhurst Wastewater Treatment Works on the Lymington River and Lyndhurst Wastewater Treatment Works on the Beaulieu River, accounting for well over 50% of total discharges. Campaigners have concerns about the discharges into the Beaulieu River at Lyndhurst (551 hours of discharge in 2021 alone) given the discharge pipe is located close to the actual source of the river. In addition, following stream restoration work, high flow conditions see discharged pollutants spilling onto adjacent grazing lawns a short distance downstream – these lawns are popular locations for grazing livestock and recreational users to congregate, raising concerns about health risks.

“As the summer holidays approach and tens of thousands of visitors prepare to enjoy the wonders of the New Forest, it just seems inconceivable that Europe’s favourite National Park is being treated like an open sewer by Southern Water. We urge Southern Water to disclose immediately what measures it plans to take to end this abuse of the country’s favourite national park.”

“The rivers and streams of the New Forest should be some of the cleanest in the country, but they are regularly being flushed with a noxious mix of pollutants expelled from wastewater treatment works. Inadequate monitoring of fauna and flora in and adjacent to the affected rivers means we simply don’t know what impact these regular discharges are having on protected habitats and species, and the extent of the long-term damage being done. We alerted the local community and our elected representatives to this issue two years ago, but we are yet to see a firm commitment by Southern Water to prioritise investment in this highly protected landscape.”

Note: this data was obtained from a Freedom of Information request and can be shared on request. Please contact: Amy Hammond, ahammond@seahorseenvironmental.co.uk

A summary of the data: 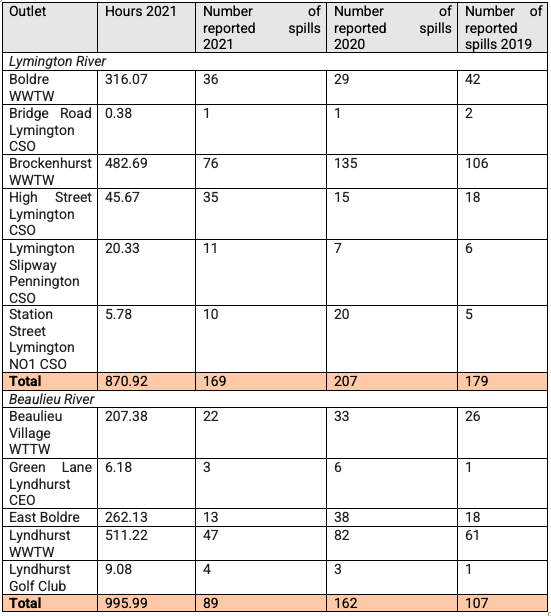