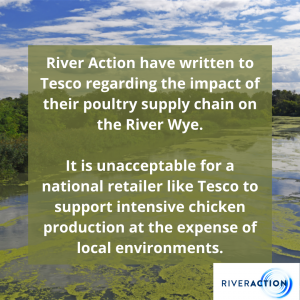 River pollution campaigners have called on Tesco to insist on urgently raised standards among poultry and egg producers in the Wye Valley where the river is in a state of ecological decline.

Tesco sources eggs and chickens from the Wye Valley, where it is the biggest customer of egg producer Noble Foods and chicken producer Avara Foods.

Represented by law firm Leigh Day, River Action has written to Tesco’s head of environment, its sustainable agriculture manager, its responsible sourcing director and its non-executive chairman, to explain why it believes intensive chicken and egg production is behind damage to the River Wye, and to call for urgent measures to address the issue.

It is estimated there are well over 20 million chickens in the Wye catchment area within Intensive Poultry Units (IPUs) and 1,400 factory farming sheds. Evidence from Lancaster University’s recently published RePhoKUs Report suggests that there are 3,000 tonnes of excess phosphorus caused by agriculture in the Wye Valley. Up to 70 per cent of the River Wye’s phosphate load is believed to be a result of agriculture, which in that area is dominated by intensive chicken farming.

In its letter, River Action says:

“The situation on the river has reached a state of emergency. If this situation continues to be left unaddressed, the River Wye faces ecological collapse. For example, ranunculus, once abundant, has depleted between 90-95 per cent over the past three years, in addition to significant reductions in salmon, invertebrates and swan numbers.”

It calls on Tesco to:

“We are deeply disappointed at the lack of tangible actions taken by Tesco so far to address the appalling environmental impact of its supply chains in the Wye catchment. The company does not seem to have registered that this river is facing ecological collapse due to the nutrient pollution caused by the intensive poultry industry. Tesco must not allow itself to potentially contribute to the destruction of one of the nation’s favourite rivers by continuing to procure its poultry products without requiring major environmental improvements from suppliers.”

“The only way we can address the ecological emergency is if each link in the food supply chain makes sure that food production is not causing irreversible disruption to natural ecosystems. There is no doubt that that must include the directors of large food retailers like Tesco. The River Wye is on its last legs and companies like Tesco can’t afford to wash their hands of the issue.”

This letter was supported by the following members of River Action Advisory Board: