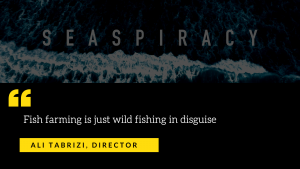 Those of you who have watched Seaspiracy will likely still be reeling. If you haven’t, we guarantee you will be after intrepid activist Ali Tabrizi has taken you on his 90-minute whistle-stop tour of our oceans.

The documentary moves from plastic pollution plaguing beaches in the UK to Taiji in Japan, where swathes of dolphins and whales are being slaughtered annually. It connects outbreaks of Ebola to the trawlers plundering fish populations off the coast of West Africa; Somali piracy to commercial fishing in the Gulf of Aden; and exposes a perilous side of shrimp fishing in Thailand. Above all, it reveals the alarming global corruption that is allowing the commercial fishing industry to go unchecked.

Particularly damning is the documentary’s uncovering of the fish farming industry. Aquaculture is often touted as an eco-friendly way to feed the world, however, Seaspiracy tells another story, a story where fish farming is simply “wild fishing in disguise”.

The fish industry claims that for 1kg of farmed salmon only 1.2kg of feed is needed. However, according to Tabrizi’s investigations, there are significantly more fish going into the farms as feed, then will ever come out as food. The documenters travel to Scotland – one of the world’s leading producers of farmed salmon. Here they chronicle horrific sea lice infestations, a common reality of fish farming across the world, and highlight the staggering chemical and organic waste from these farms being pumped into rivers and oceans. Corin Smith, an industry whistle-blower and founder of Inside Scottish Salmon Feedlots, estimates that each farm produces organic waste equivalent to a town of 10,000 to 20,000 people.

Most alarmingly, the film estimates that we eat 2.7 trillion fish a year, that’s 5 million fish a minute, with around 50% of the world’s seafood coming from these farms.

This is all far cry from the sustainable food source fish farming is publicly promulgated as. A point reiterated by Sea Shepherd’s CEO and founder Captain Paul Watson when he notes “everything is now ‘sustainable’. It’s not sustainable – it’s just a marketing phrase, that’s all”.

It is hard not to be shocked at how multi-billion-dollar companies are controlling the global narrative on fish farms. Perhaps this is one of the key lessons from Seaspiracy, that things may not all be as they appear on the tin.